A street pleasure fair takes place in the centre of New Alresford every year. A rumble of big articulated lorries announces that this surprisingly large funfair, run by John Wall & Son, has arrived in town again. Heavy machinery is unloaded and assembled. Once the big mechanical items are in place, smaller stallholders begin to arrive. They lay out their wares, in filling all of the available space in Broad Street. Suddenly, everything is ready and at three o'clock in the afternoon on a very particular Thursday in October the annual fair opens for business.

The music and the lights, the rides and the slides, the candyfloss and the toffee apple stalls are only in place for one day. The fair closes as the clock strikes eleven, marking the end of this once a year spectacle. As the public depart, the fair people begin to dismantle their equipment and to load up their lorries. By the time daylight returns on Friday morning, peace has returned. It is as though the fair had never been through.

Why does it happen in October? Why always on a particular Thursday? Why for only one night? Why do the residents and the town trades people put up with the disturbance? Why, in this safety conscious age, hasn't the event been transferred to a different, and less disruptive, venue? The answer, to all of these questions, lies in the determination of the Town Trustees, and the fair people, to maintain one of the old traditions that reflect our history.

New Alresford developed into a market town on the back of the wool trade in the middle ages; that's why there are so many old mills still standing today. Both wool and livestock needed to be traded in the town for this to happen and, as a result, sheep and lamb fairs became established and important events in the annual calendar. The two biggest sheep fairs were unsurprisingly scheduled in the summer, after lambing, and in the autumn, when ewes were purchased for breeding, of every year.

In bygone days the feast of St Michael and All Angels, or Michaelmas, announced the onset of autumn. Before the Gregorian replaced the Julian calendar in 1752, this feast was celebrated on 11 October. It became a tradition in the town for the autumn sheep fair to take place on Michaelmas Day, if it fell on a Thursday, and if it didn't, on the Thursday after the celebration. The date of today's funfair follows this ancient pattern, being scheduled according to the fall of the days of the week in the old Julian calendar. 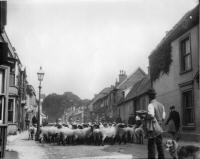 John Duthie, a local Alresford resident, describes the scene at a Michaelmas sheep fair in the 1830's thus, 'On these occasions the main streets of the town, through which passes the public highway to the metropolis, must present an extraordinary spectacle to the passing stranger, being converted into one great sheep fold, formed by wattles, and divided into compartments for the accommodation of its woolly inmates, which are congregated immediately beneath the windows of houses, or separated merely by a narrow space, barely sufficient to admit a single foot passenger. The width of the streets allow many thousands of sheep to be penned within their precincts and, from custom, the inhabitants seem to be reconciled to the inconvenience of being cooped up by the bleating multitudes which invade their premises, and to the noise and the bustle of the buyers, sellers, and drovers who attend upon them.'

By the 1880's, the shopkeepers and residents of the main streets of the town had successfully appealed against their lack of privacy and freedom. Hygiene and drainage had become more important and they had escaped the incessant noise and the appalling smell that had once been imposed upon them by the woolly invasion. The sheep and lambs had been allocated their far more convenient place at Fair Field and all that was left behind in the centre of town at Michaelmas was a Pleasure Fair. Entertainment rather than sheep dealing had become its revised focus. A poster from 1895 still exists setting out the regulations for the Alresford Fair. 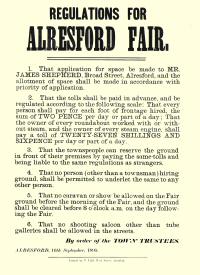 One local legend lies at the heart of the reason that the funfair of today is limited to one night only. Passed down by word of mouth through the ages is the tradition that if the sheep and wool dealers had not cleared the whole of Broad Street by dawn on Friday morning, then those in authority in the town would not have permitted the traders to return the following year. However this legend is far more likely to have derived from one of the practices of the auctioneers at the sheep fairs. The terms and conditions contained in every sheep auction catalogue contain a clause that states that 'lots must be paid for and cleared immediately after the fair closes'.

Another myth is that if a year passes without the fair being held, it will never be allowed to return to the centre of town. This may have arisen because stallholders used to earn their right to the best plots by their regular attendance. If they missed a year they had to revert to an inferior spot. Living residents can remember small numbers of stallholders continuing to turn up in the town during the Second World War even though there was no event scheduled. In the Town Trust minutes of 17 October 1944 it is recorded that, 'The Clerk reported that.he had discovered that a Zoo Proprietor, who was passing through the Town, had stationed his caravan for a short time in Broad Street, for the purpose of keeping open the fair.'

At that meeting a Trustee, named Cameron Black, was deputed to lay the myth to rest. He was asked to examine the wording of the English translation of the original charter of 1572, under which the Bishop of Winchester had set out, in Latin, the duties and responsibilities of Bailiff and Burgesses of Alresford. The minutes of the following Trustees meeting on 14 November 1944 , under the heading of 'Fair Charter' laconically record, 'Mr Black reported that he had read the Charter and could find no mention of failure by default.' This writer has also perused that self-same document and has drawn the same conclusion.

The same is still true today. The inheritor of the 'pavage' grant of 1302 is the New Alresford Town Trust. The Trust still retains that ancient right to collect rents from market stallholders and from passing through fairs in Broad Street . Although today's fairs are organised by John Wall & Son, they still need some help from the Town Trustees. They consult the residents and are careful to see that the disruption to the town is kept to a minimum. They arrange for the roads to be closed and organise the necessary diversions. They liaise with the police, the parking authorities, the bus companies and the watercress growers. 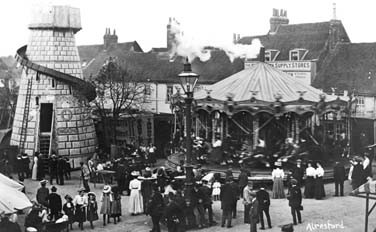 The current Town Trustees are at one with their predecessors in their endeavour to ensure that this one small celebration of our ancient traditions remains in the centre of town. At a meeting held on 6 November 1886 , the Bailiff and Burgesses of New Alresford were faced with a petition signed by thirty-nine inhabitants of the town expressing a desire, 'that the Fair and the shows hitherto held in the Town shall in future be held in the Fair Field.' The minutes continue, 'This was considered and it was resolved that the following reply be sent to (the petition organiser):- 'That the Bailiff and Burgesses being the custodians of the Fair do not feel at liberty to take any step towards its removal'.

Imagine yourself standing in Broad Street on the evening of a Julian Thursday in October, you look up at the stars and taste the autumn night air, then maybe, just maybe you can hear the bleating of the thousands of sheep that stood on this very same spot at the Michaelmas Fair in the middle ages. And then maybe again, you can picture the scene of the Pleasure Fair in Victorian times with the steam driven roundabouts and the tube shooting galleries. Feel a bit of history and come along to the fair! 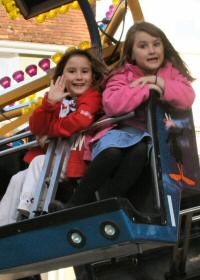 This year's fair is scheduled for Thursday 13 October