The Town Trust is one of the oldest bodies in New Alresford. It is a direct descendant of the medieval local government system begun by King Edward I. Although the town was destined never to receive a royal charter, as long ago as 1295 the town was recognised as a free borough. The evidence for this is contained in the attendance records for the King Edward's Model Parliament. The County Sheriff of Hampshire invited the town to send two members and two individuals, William de Owton and William de Alayn, duly accepted.

Representatives of the town continued to attend Parliament until 1348, when a decline in prosperity caused by the Black Death led the borough members to ask the Sheriff, 'to be released from the burthen of sending representatives to the common council of the realm'. Although sending no members to Parliament it is likely that New Alresford retained its status as a borough run by a corporation comprising a selection of the good gentlemen of the town.

In 1572 the town's status was confirmed in writing when Robert Horne, Bishop of Winchester, in return for a fixed annual rent, granted the Borough of New Alresford to a body that was to consist of one bailiff and eight burgesses. From that date the income of the borough was under the control of these nine representatives of the town. Once they were elected and sworn in, these men were entitled to preside over a court to hear minor cases of debt, theft or trespass.

Although their rights to hold courts of law ceased around the end of the seventeenth century, the bailiff and burgesses continued to control the income of the borough all the way through to the 1880's. This income consisted of tolls for using the roads and rents paid by stallholders at the town's markets and fairs. In the minutes of the Bailiff and Burgesses dated 22 August 1709 the following statement can be found. It gives an indication of how the income was spent.

'The Bailiff shall receive of the profits of the Markets and Fairs the sum of eight pounds and no more. The profits over and above this sum are to be lodged with the Treasurer, annually chosen by a majority of the Burgesses. Henceforward the said Bailiff shall not be responsible for any charges for keeping the Gates, Bridges or Pound or any other charges for repairs to property that belongs to the said body. These charges are to be defrayed and maintained out of the monies in the hands of the Treasurer.'

The minutes recorded on behalf of the Bailiff read serenely through the centuries until 1882 when the bombshell of the Municipal Corporations Bill was dropped on to the unsuspecting body. The Act, passed the following year, abolished Corporations of Bailiffs and Burgesses and set up democratically elected parish and district councils in their place. The nine good men and true of New Alresford reacted with horror.

They resolved to fight to keep their rights and their property and even contributed to a national fund to oppose the Act. Their minutes of 8 June 1882 read, 'At a court this day held Lord Rosebery's Bill for abolishing this Corporation, with others, was considered and it was resolved that Mr Edward Blackmore, one of the Burgesses, be requested to attend a meeting to be held at the Westminster Palace Hotel on Tuesday 13 June.'

The minutes continue, '.that Mr Blackmore have the authority to promise on behalf of the Corporation a subscription towards the expenses of opposing the said Bill - such subscription not to exceed ten pounds.'

In fact the Bailiff and Burgesses of the dying corporation held out for seven years in refusing to comply with these local government reforms. By 1889, they had plotted an escape route. The Charitable Trusts Act of 1860 gave them their opportunity. The Bailiff and Burgesses formed a 'scheme' under the auspices of the Charity Commissioners into which they transferred the future administration of their rights and assets.

The legal document of the 'scheme' forming the Town Trust was sealed on 28 March 1890. It decreed that there were to be a maximum of nine trustee positions. The sting in the tail for the former Bailiff and Burgesses was that the Charity Commissioners required that only four of roles be available to people like themselves; the other five trusteeships had to go to elected individuals nominated by the soon to be formed New Alresford Parish Council.

The first meeting of the Town Trust was held on 10 June 1890 in the offices of its elected Chairman, John Ridley Shield, a solicitor. The three other former burgesses to become Town Trustees were William Henry Hunt, Charles Edward Hunt and Charles Edward Covey. The Trust's assets included a fire engine house, a hurdle house, land on either side of The Avenue and land comprising the Broad Street sidings. Its revenues came from rents on the properties and tolls charged to stallholders at fairs and markets. Their responsibilities included the town's water supply and managing several trust funds that had been set up by individuals for good causes. At the first meeting it was agreed that two bank accounts be opened; in one of them the sum of £346 17s 4d was to be deposited and in the other £25 12s 10d.

The Trustees' responsibility for the town's water supply and their land ownership of the Broad Street sidings were both quickly relinquished. The Trust's roles on Broad Street today are limited to managing the trees and maintaining the benches. The Hurdle House on the Bishop Sutton Road was sold in 1980 after the final sheep fair had been held. The last remaining individual trust fund was handed over to Perins School to be run as an educational foundation in 1993.

The Town Trust is still responsible for 'The Old Fire Station', the land on either side of The Avenue and for the town's markets and fairs. In 2009 it acquired the Eel House that spans the River Alre, not far from The Dean. The Trust's current income is used to run the town's community minibus service.

New Alresford was not the only town to form a Town Trust in the wake of the Municipal Corporations Act of 1883 but there weren't many of them. Sheffield and Stratford upon Avon are two of the largest examples. But in modern times many more Town Trusts have been set up to promote worthy causes such as the preservation of ancient buildings or the protection of a cultural amenity. Perhaps we should thank our ancestors of the 1890 era for their foresight and for being well ahead of their time. 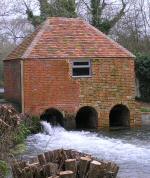